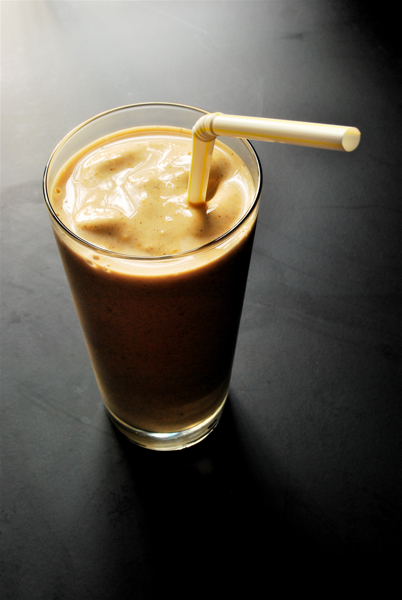 If you can sift through all of my ramblings over the past year, you may remember that I once, in a previous post, referred to myself as the real life Linus. I still do. It’s not that I ever believed in (or heard of) the Great Pumpkin as a child, but Linus and I share a strange, almost enchanting, enthrallment with this glorified gourd.

What makes it different from other seasonal, autumnal squashes? The flavor is different, but eh, not that different from, say, a butternut squash. It grows in patches on the ground just like other squashes. What makes it stand high on a pedestal and makes it the ever-loved symbol of Autumn?

I’m really not quite sure of the answer to that, but I will take you back a little bit. The Irish and English traditionally carved scary faces and whatnot into turnips, like, a long time ago. Fast forward a little bit to when people started moving to North America and that’s when native pumpkins started being used for scary carvings. Pumpkins, however, were used for a ton of things long before that and long before people started moving across the Atlantic. Native Americans used them for flour, mats, medicine, you name it. They knew what was up. And they stored during really cold months super well and, in turn, helped early settlers and Native Americans get through winters. They were so important to early North America. So, they were eaten and eaten and eaten and served, most iconically, at the first Thanksgiving dinners. I think after years of them being so incredibly versatile and then being around for early Halloween celebrations as lanterns and then sitting on Thanksgiving tables, pumpkins kind of snowballed themselves into becoming a general Autumn tradition. Plus, who doesn’t love a pumpkin dish with a blend of good spices? And they’re just so darn pretty. 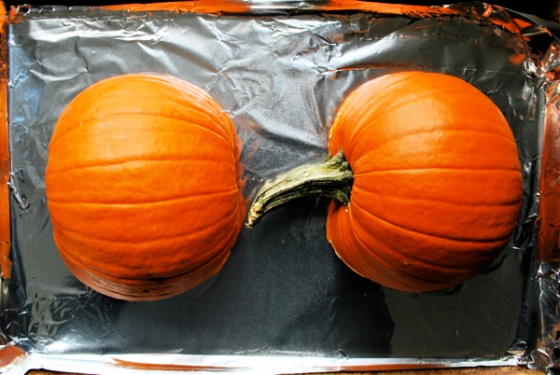 History gets me going. Pumpkins get me going. Mix ’em together and BOOM you’ve got an excitement explosion. I’m sorry I talk too much. But this recipe is inspired by, yes, you guessed it, Starbucks’ pumpkin spice latte. I almost feel like that one drink release each year is the ribbon-cutting ceremony to the season (although I never order it. I love chai too much to get mixed up in all that coffee business). Plus, my husband loves it and I knew it would make him happy.

I based the recipes in my pumpkin series last year on roasted pumpkin purée, a simple mash-up of cooked pumpkin flesh. To get a refresher or to get the recipe, visit my archives from September 2011 or click on the link provided. 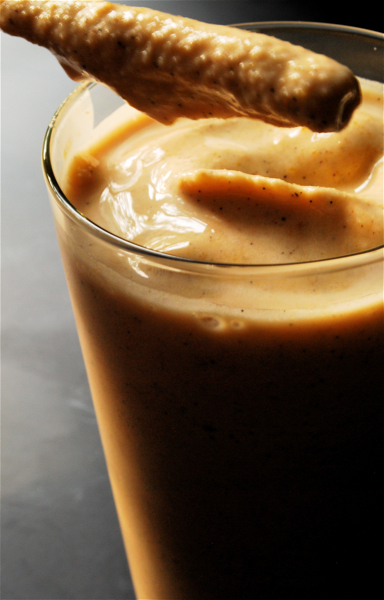 create
Add pumpkin, spices, and espresso to a blender and blend until smooth and completely combined. Add ice cream and mix until creamy and ice cream is fully incorporated. You may add more or less espresso depending on how thick or thin you like your milkshake. Serve immediately. 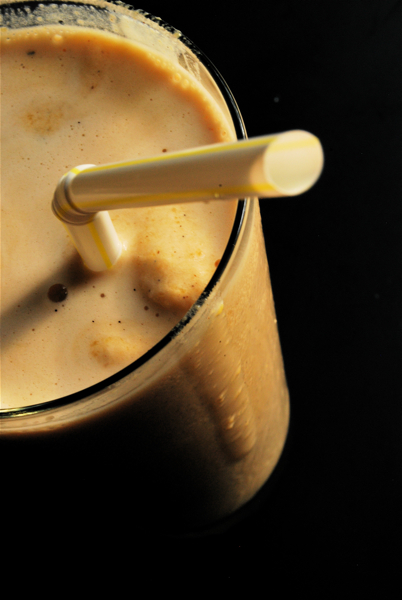 “…Ah! on Thanksgiving day, when from East and from West,
From North and from South comes the pilgrim and guest;
When the gray-haired New Englander sees round his board
The old broken links of affection restored,
When the care-wearied man seeks his mother once more,
And the worn matron smiles where the girl smiled before,
What moistens the lip and what brightens the eye?
What calls back the past, like the rich Pumpkin pie?

Oh, fruit loved of boyhood! the old days recalling,
When wood-grapes were purpling and brown nuts were falling!
When wild, ugly faces we carved in its skin,
Glaring out through the dark with a candle within!
When we laughed round the corn-heap, with hearts all in tune,
Our chair a broad pumpkin,—our lantern the moon,
Telling tales of the fairy who travelled like steam
In a pumpkin-shell coach, with two rats for her team!

Then thanks for thy present! none sweeter or better
E’er smoked from an oven or circled a platter!
Fairer hands never wrought at a pastry more fine,
Brighter eyes never watched o’er its baking, than thine!
And the prayer, which my mouth is too full to express,
Swells my heart that thy shadow may never be less,
That the days of thy lot may be lengthened below,
And the fame of thy worth like a pumpkin-vine grow,
And thy life be as sweet, and its last sunset sky
Golden-tinted and fair as thy own Pumpkin pie!”