I have this thing with soups. Most of the time when I crave something, it’s soup. I’m also not really a don’t-let-my-foods-touch kind of person (you know, elementary school lunch tray), so soups just make sense. Even in hot weather (and I mean SC hot, like 126 degrees hot), I still want soup. My family will say, “Gumbo? Chili? In this?” as they’re fanning themselves with the first flat thing they can find (in my house, it would probably be a Judy Garland album or a piece of sheet music) and sweating is a normal occurrence even when the air conditioning is blowing right in their faces. Ugh. But that’s over. It’s autumn now. And it’s pumpkin time. And I have no fear that people will gladly come eat soup with me, without any strange “huh?” faces in sight. Thank you, cool weather, for arriving!

On our first anniversary, Husband and I went to western North Carolina for a beautiful vacation in the mountains. On the way home in a little restaurant in Blowing Rock, we found and ordered a roasted red pepper gouda soup. It was meant to be shared. I ate the whole bowl. It was incredibly warming and completely satisfying, even when the husband was trying to fight me for the spoon in between every bite and we ended up flinging some of it around the restaurant (am I WRONG here?). So, when trying to figure out what dish I was going to make for the third (and last!) chapter of the pumpkin series, I first thought, “Soup!…but how?” and then I remembered this soup that we fought over a year ago. Perfect! 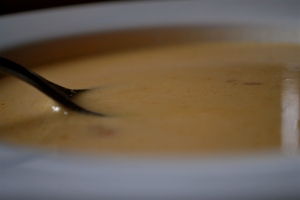 create
In a large saucepan or Dutch oven, cook the bacon over medium heat until crisp. Remove the bacon to paper towels and drain all but one or two tablespoons of bacon grease from the pan. Add the onions (and a few pinches of salt and pepper) to the grease and sauté until tender.
A teacher in a cooking class the husband and I took once told us to add a little salt and pepper to each stage of the cooking so that everything would be separately seasoned.
Add the garlic, red pepper flakes, cayenne (I like spicy things and I feel that a little spice brings out flavors, but this is totally optional) and allspice. Cook a minute longer.
Stir in the broth and the pumpkin and bring to a boil. Reduce the heat and allow it to simmer, uncovered, for about 10 minutes. Remove from the heat and let it cool slightly. 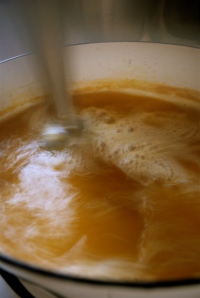 Using a hand-held immersion blender (these things are the bomb, super easy to use, and I totally recommend), process the soup until it’s smooth and large chunks are gone. If you don’t have an immersion blender, you could always mix the soup in a countertop blender in batches. Return to the heat and stir in the cream. Heat thoroughly. Taste it to see if it needs more salt, pepper, or allspice.
Stir in the shredded gouda until it’s melted. Serve hot with the reserved bacon (chopped) and, if you’d like, extra cheese.

This is one of those soups that is so comforting that it’s like a friend in a bowl. Except you’re eating the friend. It’s okay. This is a friend that knows exactly what you need: a perfectly delicious time of warm happiness.
I’m a nerd. Someone just get me a bowl.